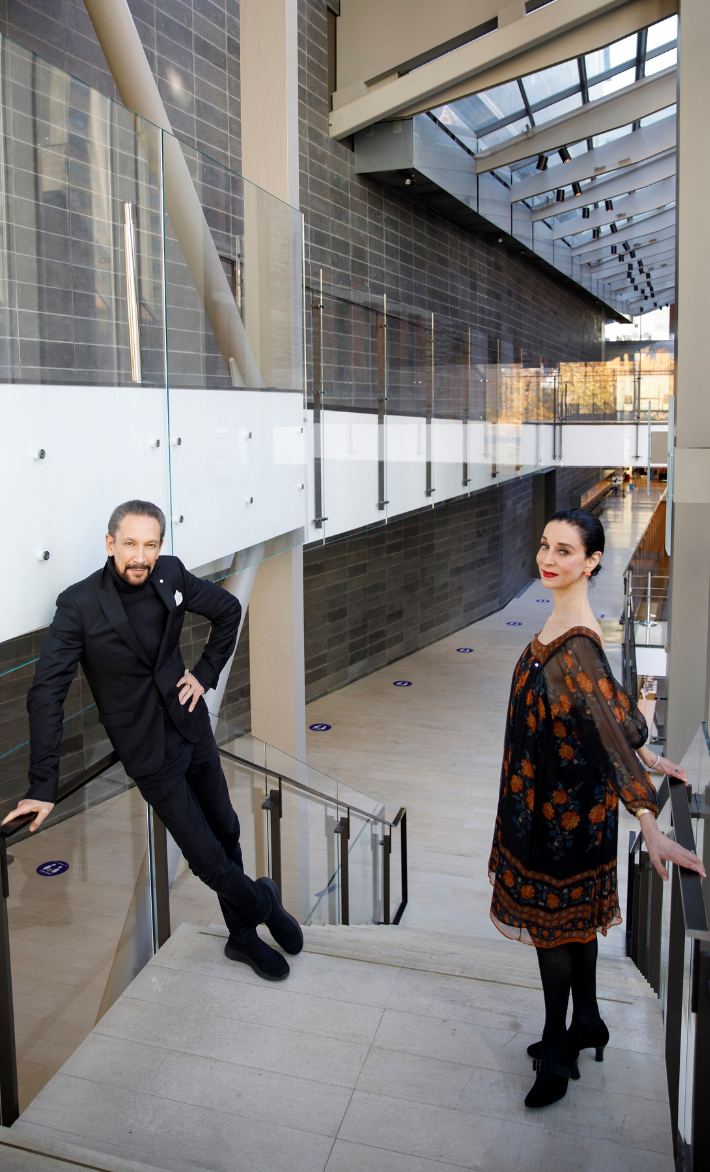 Handel's The Resurrection: I'd Take The Fire

It’s early in the morning after the completion of an exhausting two days of filming for the long-awaited Opera Atelier production of Handel’s The Resurrection, and it might be logical to assume that Marshall Pynkoski and Jeannette Lajeunesse Zingg would be sleeping in.

But if you think that, then you don’t know them and the passion for creation that’s infused their entire lives.

The dynamism is present as soon as they answer the phone. “We’re resurrecting The Resurrection!” declares Pynkoski energetically, as if he’d just spent the past week at a spa instead of bringing a complex work to life in impossible conditions. “Bravery comes with the territory.”

“There was so much against us being able to complete this project that it seemed like a miracle,” adds Lajeunesse Zingg, speaking with the calm strength that is her trademark.

And, as has always been the case since they founded Opera Atelier in 1985, they’re both right.

It’s an organization that has specialized in doing the impossible, rising from humble origins financed by the pair mortgaging their house, to becoming a company revered around the world.  But, in all their history, there has never been a project quite like The Resurrection.

Handel’s complex work was originally scheduled to be performed at Koerner Hall as part of Opera Atelier’s 35th Anniversary season in April of 2020.   The onset of the pandemic ended those plans, but it was bravely rescheduled to appear as part of the “Reimagined 35th Anniversary Season”, once again on stage in Koerner Hall, opening this past April 1.

Again, circumstances made it impossible, but – as Pynkoski gamely puts it – “We’ve learned to roll with the punches. You can’t just do things in the old way and try to drop them into the new form.”

They set a plan in motion by which they could still stage it at Koerner Hall and then film it, as they did with this past fall’s triumphant Baroque collage, Something Rich and Strange.‍

The score was recorded by the cast and Tafelmusik and rehearsals were about to continue for the staging of the work when another, more severe, lockdown made Koerner Hall unavailable.

But then, Opera Atelier’s deep understanding of  the production of Baroque opera throughout history, came to their rescue.

In 1708, when The Resurrection was supposed to debut, a papal decree had closed all the theatres in Rome and so, as Lajeunesse Zingg astutely observes, “They moved into the ballroom of the Ruspoli family’s palace…”

After the slightest pause, Pynkoski completes the thought: “….and the St. Lawrence Hall, where we rehearse, was originally used as a ballroom.”

And, as such, it was able to be used as a studio where The Resurrection could be filmed.

Rigid Covid protocols were introduced for every step of the process, so much so that one member of the company declared “I feel like I’m in the safest place in Ontario.”

That care for safety, coupled with the devotion of the company, led to everyone willingly participating,

What sustained everyone the most, however, was the work itself.  “This story of rebirth and renewal has tremendous resonance right now,” said Lajeunesse Zingg.

Pynkoski concurred. “People need a positive life-inspiring message like this. As Cocteau said, ‘The masterpiece belongs to the person who can lift it.’”

But a great deal of heavy lifting had to take place for all this to happen. “We didn’t want this to be an apology,” insists Pynkoski. “Film is part of our life now. We’re not dropping it when the pandemic is over.”

“It’s a highly sensual work,” Pynkoski explains, “and most of my original staging was based on people being in each other’s arms.”   But now, they all had to remain six feet apart.

Pynkoski admitted to being concerned how the extremes of emotion could be conveyed until a key moment in the process.  All the performers remained masked throughout the process until the cameras actually rolled.

“When the masks came off, it was the first time they saw each other’s faces,” recalls Pynkoski. “We didn’t have to worry about intimacy. The emotion was so intense.”

There was another element which made the stakes on this production incredibly high.

Patricia Barretto, who had served brilliantly as Executive Director of Opera Atelier from 2011 through 2015 and had gone on to a tremendously successful tenure as President and CEO of the Harris Theater for Music and Dance in Chicago, died of cancer during the early days of the 2020 preparations for The Resurrection.

Pynkoski and Lajeunesse Zingg left rehearsals and flew to Chicago to be with her in her final days.

“We did not expect her to die,” says Lajeunesse Zingg softly. “The loss of her followed by the loss of this production. We felt like we were reeling,” adds Pynkoski.

But the two of them vowed to mount the production somehow and dedicate it to Barretto, which they haveThe two of them are silent for a moment after discussing her.  Then Pynkoski recalls what they have just completed.

“Last night, when we finally finished, I talked to the company.  I told them of how Cocteau was once asked if his house was burning down and he could take one thing, what he would do. He paused and said, ‘I’d take the fire.’ That is all of you, I told the company. You could have found a million reasons why this couldn’t go on, but you didn’t.”

Lajeunesse Zingg agrees. “It was a moment of such happiness, such relief, such joy.”

The third time’s the charm for The Resurrection as Opera Atelier’s filmed version will finally have its premiere at 7PM on May 27, 2021.

“Although I’d like to change the title,” offers Pynkoski. “Opera Atelier presents The Resurrection: I’d Take the Fire."

Don't miss the Canadian Film Premiere of Handel's The Resurrection on Thursday, May 27, 2021 at 7:00PM ET. Purchase your tickets today!