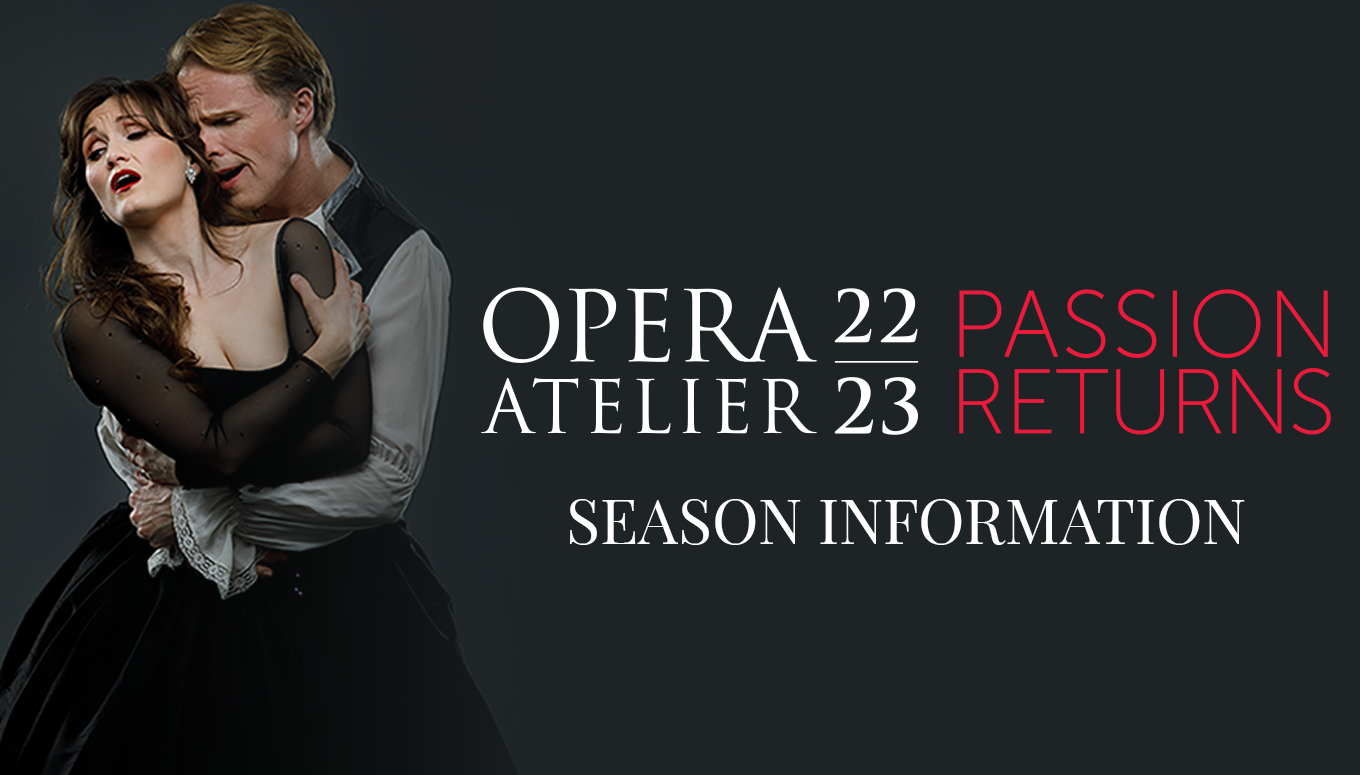 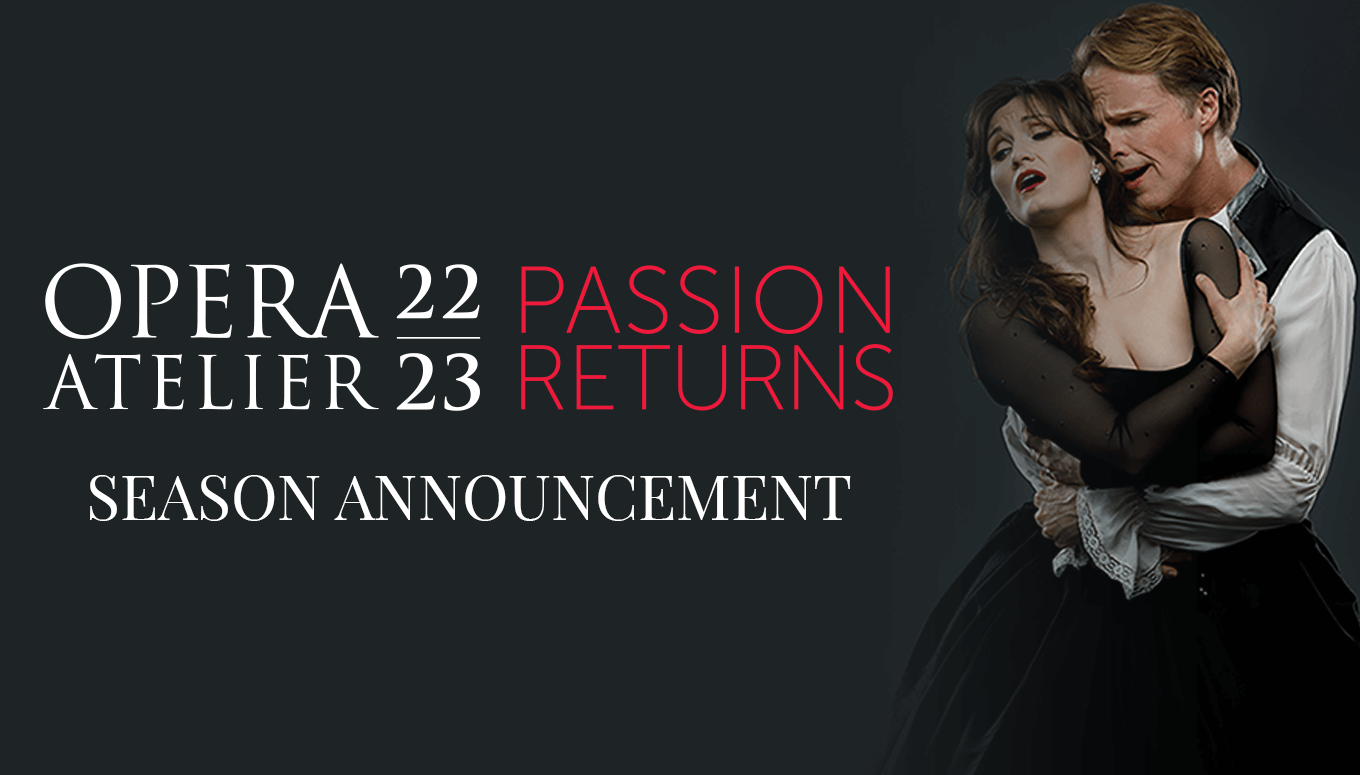 Celebratory season marks the return of soprano Measha Brueggergosman-Lee and many of Opera Atelier’s most beloved artists
‍
Toronto, ON — Opera Atelier’s Founding Co-Artistic Directors Marshall Pynkoski C.M. and Jeannette Lajeunesse Zingg C.M. today announced the company’s powerful 2022/23 season with a live subscription series titled Passion Returns.
‍
Passion Returns will feature one of the most iconic operas in the English language - Purcell’s Dido and Aeneas and the company’s long anticipated Canadian premiere of its fully-staged, live production of Handel’s The Resurrection. Both productions will be directed by Pynkoski and will include the full corps of Artists of Atelier Ballet, with choreography by Lajeunesse Zingg, coupled with the renowned Tafelmusik Baroque Orchestra, under the baton of Opera Atelier’s Music Director David Fallis.
‍
The season opens with Opera Atelier’s return to the Elgin Theatre with Dido and Aeneas, October 20 and 22, 2022 at 7:30pm and October 23, 2022 at 2:30pm. Based on Virgil’s epic poem The Aeneid, Dido and Aeneas was composed by Henry Purcell with libretto by Nahum Tate at the end of the 1680s. It tells the story of Dido, the widowed Queen of Carthage, who embarks on a blatant affair with the mesmerizing Trojan prince, Aeneas. When he abandons her, she bravely embraces her one alternative to a life of humiliation and regret.
‍
“We are delighted to celebrate our return to the Elgin Theatre with Opera Atelier’s most internationally-acclaimed production of Dido and Aeneas,” says Pynkoski. “Opera Atelier’s Dido and Aeneas has toured throughout the US, France, England, Switzerland, Italy, Germany, South Korea and Singapore - always invited to major venues including the Houston Grand Opera, the BBC Proms (Royal Albert Hall), the Seoul Arts Center and the Royal Opera House (Versailles).”
‍
Dido and Aeneas features a cast of Canada’s finest singers, all making their role debuts. Soprano Meghan Lindsay and tenor Colin Ainsworth portray the ill-fated lovers, and soprano Measha Brueggergosman-Lee takes a star turn as the desperately wicked Sorceress. The cast also includes soprano Mireille Asselin as Belinda, tenor Spencer Britten, soprano Cynthia Akemi Smithers, mezzo soprano Danielle MacMillan, and the Artists of Atelier Ballet completing the stellar line up.

Opera Atelier’s 2022/23 season continues with Handel’s visionary masterpiece, The Resurrection, presented in the superb acoustics of Koerner Hall, TELUS Centre for Performance and Learning, April 6 and 8, 2023 at 7:30pm and April 9 at 2:30pm.
‍
Written for Easter of 1708, Handel’s The Resurrection details the events between Good Friday and Easter Sunday, focusing on Christ’s resurrection following his crucifixion and burial. The narrative plays out simultaneously across two spheres: In the celestial realm, a combative Angel disputes Lucifer’s claims to victory, while on earth, Mary Magdalene, Mary Cleophas, and St John the Evangelist struggle to come to terms with the stark reality of Christ’s death.
‍
“We are thrilled with the opportunity to mount one of the most remarkable accounts of the Resurrection story for a live audience,” says Pynkoski. “Handel’s expansive vision for this story of victorious rebirth is widely considered one of his greatest works. Not only is the production a feast for the senses - from the impressive set design to the inspired choreography and thrilling score - it is also a moving tribute to the universal story of sacrifice and redemption, as embodied by a heroic protagonist.”
‍
The production’s choreography by Lajeunesse Zingg restores the original splendour of Handel’s opera, employing the full corps of the Artists of Atelier Ballet, spanning the entire breadth of Koerner Hall’s stage. Both male and female Artists of Atelier Ballet will engage in swordplay designed by Jennifer Parr. This staging underlines the militant tone of the production’s opening aria, in which an army of angels aggressively approaches Lucifer’s realm.
‍
“It is a delight to premiere Handel’s transcendent creation in the stunning acoustics of Koerner Hall,” says Lajeunesse Zingg. “Handel’s The Resurrection was never envisioned for a conventional theatre, and Koerner Hall lends itself wonderfully to Handel’s original intentions.”
‍
The Resurrection features soprano Carla Huhtanen as the Angel. Huhtanen’s renowned coloratura brings brilliance and edge to the Angel’s showstopping arias. Charismatic bass-baritone Douglas Williams will play the role of Lucifer. He is joined by tenor Colin Ainsworth as St. John the Evangelist, soprano Meghan Lindsay as Mary Magdalene, and mezzo soprano Allyson McHardy as Cleophas.
‍
Dido and Aeneas and The Resurrection will include set design by Gerard Gauci and lighting design by Kimberly Purtell.
‍
2022/23 Season Subscriptions for Passion Returns are now on sale at: OperaAtelier.com or by calling 416-703-3767 x 700.
‍
Single tickets for the 2022/23 season will be on sale August 2, 2022.
‍
Season Presenting Sponsor: BMO
Season Presenting Underwriter: El Mocambo Productions
‍
Opera Atelier gratefully acknowledges the support of The Canada Council for the Arts, the Ontario Arts Council, the Ontario Trillium Foundation, and the City of Toronto through the Toronto Arts Council.