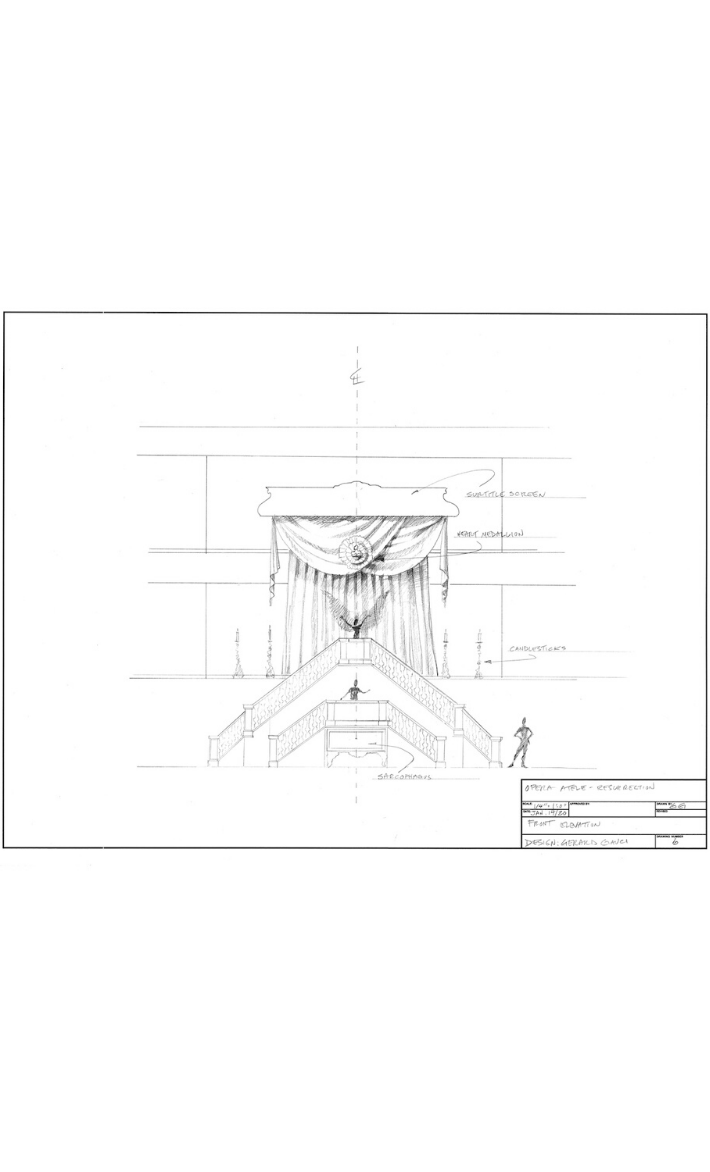 Over the past few months I’ve been approached by Opera Atelier supporters wanting to know how I was going to design an OA show in Koerner Hall, a concert hall with no proscenium arch or fly system. Given that I typically design sets that rely heavily on trompe l’oeil scenery changing from scene to scene thanks to a theatre’s fly system and house curtain it was a question I was at a loss to answer.

It wasn’t until later when I attended a concert at Koerner Hall with Handel’s Resurrection on my mind that the answer came to me. The concert that evening didn’t quite capture my interest and in the moments when my attention wandered I studied the hall. I noted the beautiful honey-coloured wood, the sinuous panels extending from the back of the choir to the ceiling, the curved walls embracing the performers on stage and the perfectly-integrated architectural vision that makes the space feel so welcoming. I understood that Koerner Hall asserted its presence so completely that any scenic additions I made to the space had to respect and marry with the hall itself.

For the first time I opted to forego painted architecture and false perspective. Instead of faux marble or tapestry I asked my scenic painter to reproduce the colour and grain of the wood that makes up the interior of the hall. I imagined a fully realized, multi-level set consisting of staircases (faced in a simple design suggesting heaven and hell), platforms and pulpits. All architectural elements were to be built and painted to match the hall. The design for the pulpits was derived from the Italian cassapanca, a type of storage bench frequently found in baroque palazzi often highly decorated and shaped in cut-out profiles. The balusters on the staircases were modelled after Palladian urns and like the pulpits, realized as flat wood profiles reflecting the horizontal slats that surround the stage. Without a curtain to facilitate scene changes the set had to be stationary throughout. Changes would be achieved with light making the role of the lighting designer more apparent and important in this production.

The libretto of Handel’s Resurrection speaks in the language of Catholic symbolism so props inspired by many visits to cathedral treasuries in Italy became an important part of the design. Props are simple but effective storytellers and as I write these notes my studio resembles a goldsmith’s shop filled with gilt and jewelled symbols of Christ’s Passion. For now I’m more of a sculptor than a painter.

Looking back I see that the simple answer to the question posed by so many of our supporters should have been that instead of thinking in two dimensions as I usually do I’d begin by thinking in three and then I’d let the hall itself tell me what to do.

Opera Atelier's production of Handel's The Resurrection is on stage at Koerner Hall, TELUS Centre from April 11 - 19, 2020. Buy your tickets today!